Springhill, FL: Kristine’s son was born without incident – a healthy baby boy. He is now 4 years old and was recently diagnosed with a condition that could kill him if his parent’s aren’t vigilant. It turns out he was born with this condition, and Kristine wonders if the Paxil she took while pregnant could have contributed – could it be a Paxil birth defect? 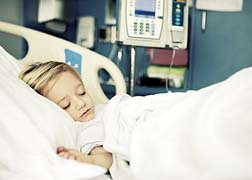 “My son has severe asthma – which became evident when he was around 11 to 12 months old,” Kristine said. “I woke up one night to check on him and saw that his lips were blue. I’ve taken CPR and first aid so I knew that he was not getting oxygen.”

And so it began, Kristine’s son was diagnosed with asthma and was put on the appropriate medications. But then things got worse. She kept her baby monitor on at night and would hear her son gagging in his sleep. Kristine took her son to the pediatrician several times about the problem, recognizing that her son could suffocate in his sleep. But she wasn’t satisfied with the answers so she went to an ear, nose and throat specialist.

“He put my son under anesthetic, and did a scope, and they found a flap of cartilage in his Adam’s apple. The doctor said that my son was born with this defect.” Kristine said. While she has no way of knowing if Paxil caused this, she does wonder.

“I read information about birth defects associated with antidepressant use and it got me thinking,” she said. Kristine took Paxil before she was pregnant and throughout her pregnancy, and her health care professionals said there shouldn’t be any problems.”

Kristine, like many women, knew that the selective serotonin reuptake inhibitor (SSRI) she was taking carried warnings about the risk of birth defects associated with the use of the drug during pregnancy. That’s why she asked her doctor about staying on her medication. “I was on the lowest dose of Paxil possible, and I was told that it would be fine,” Kristine said.

Kristine did everything right, she asked the right questions at the right time, but she still has doubts. “I have a 12 year old daughter who is completely healthy, and I didn’t take anything while I was pregnant with her,” Kristine said. “And I have a friend who was also taking an antidepressant while pregnant and her son has asthma, and developmental problems. And then I read other women’s stories, many of which are very similar, and I wonder if there’s a link between their children’s health problems and antidepressant use during pregnancy.

Paxil isn’t the only drug that has been linked with birth defects. The SSRIs Prozac by Eli Lilly, Zoloft by Pfizer, and Celexa and Lexapro sold by Forest Laboratories, along with various generic versions of the drugs are also controversial. And the closely-related class of SNRI antidepressants, which include Wyeth’s Effexor and Lilly’s Cymbalta, also carry birth defects warnings.

Just what are the birth defects? The published studies so far, and they are few, highlight the risk for persistent pulmonary hypertension (PPHN), and this is what the package warnings refer to.

However, in 2007, a study published in the New England Journal of Medicine showed that the use of antidepressants in the first 3 months of pregnancy more than doubles the risk of and craniosynostosis (premature closure of the connections between the bones of the skull before brain growth is complete), omphalocele (the child’s abdomen does not close properly allowing intestines and other organs to protrude outside the body), and anencephaly (birth without forebrain).

Although Kristine’s son birth defect may not seem dramatic, it is life threatening. He must sleep upright as precaution against his choking to death, and his parents will obviously continue to monitor him. But one has to ask, could all this worry and suffering have been prevented?

Filed under The Mother's Act

One response to “Paxil Birth Defects — The Never-Ending Vigil”